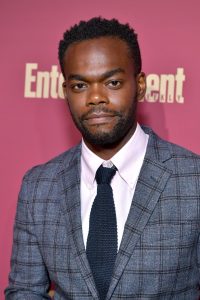 William Jackson Harper on The Good Place and his new film We Broke Up.

William Jackson Harper won the hearts of fans as the sweet philosophy professor Chidi Anagonye on NBC’s The Good Place. The series went on for four seasons and got him a handful of award nominations, including an Emmy nod. Then in 2019, he starred as Josh in the critically acclaimed horror movie Midsommar.

These days, he’s got even more on his plate. He’s working on a couple of upcoming projects including the new Amazon series The Underground Railroad. The show is directed by Barry Jenkins, who made Moonlight and If Beale Street Could Talk, and is set to premiere in mid-May.

He also stars alongside Aya Cash in the new romantic comedy We Broke Up. In the film, Doug (Harper) and his longtime girlfriend Lori (Cash) split up just days before Lori’s younger sister’s big destination wedding. To avoid showing up alone and stealing the spotlight away from her sister’s big day, Lori and Doug decide to attend the wedding and pretend they’re still a couple for the weekend.

William Jackson Harper joins guest host Linda Holmes of NPR’s Pop Culture Happy Hour to talk about his new film and upcoming projects, The Good Place, some of the TV shows he’s been binging and a new hobby he’s picked up during the pandemic. Plus, they’ll chat about his love for scary movies and dive into some of his favorite horror films and thrillers.

Liked William Jackson Harper? Listen to these next...