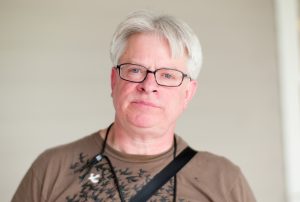 Rick Prelinger on using ephemeral media to explore the recent past

Rick Prelinger is an archivist and professor at UC Santa Cruz. He’s a collector of found and discarded footage: home movies, outtakes from industrial videos and never before seen b-roll from old feature films. He has digitized, labeled and archived literally thousands of hours of footage.

Maybe one of our favorite things Prelinger has done, though, is the film series Lost Landscapes. In it, Rick compiles footage from his archives to create documentaries about changing cities. He’s covered San Francisco, Los Angeles, Oakland, Detroit and more.

You can view all of the Lost Landscape films on Rick’s website. But the best way to see the movies is in person. Rick presents the films in a big auditorium without a soundtrack. He grabs a mic and sort of acts as tour guide, and the audience is encouraged to chime in: questions, memories and discussion.

We talk with Rick about his film series, how he curates the archives and we discuss his passion for all things ephemeral. Plus, he shares a story about the time he found a video of himself at 5th grade in someone else’s home movies.

Liked Archivist and documentary filmmaker, Rick Prelinger? Listen to these next...

The Song That Changed My Life: Doc Severinsen