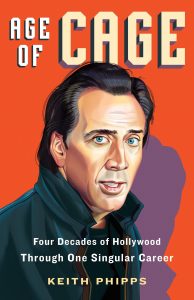 Keith Phipps on his new book and Nicolas Cage’s career

Keith Phipps is a writer who has worked for the AV Club and the Dissolve. He specializes mainly in pop culture, making him a natural fit for the show.

Keith just wrote his first book. It’s called Age of Cage: Four Decades of Hollywood Through One Singular Career. The subject of the book is, the one and only Nicolas Cage.

Nicolas Cage is arguably one of the most enigmatic actors in recent memory. In his over forty years of acting, Cage has performed in unforgettable classics, arthouse indies, blockbuster action movies, direct-to-video horror and everything, literally every possible thing, in between.

To the subscribers on reddit that call him the “One True God,” he is a human meme that is perfect for freak-out compilation videos on YouTube and cringey tribute art. To his critics, he is an eccentric goof chasing his past glory. To his fans, he is simply an actor who loves to work, and never fails to give his all, no matter how small or weird the part. It is not a career that fits neatly into any one box, and it is not a life story you can tell with a simple biography.

So Keith Phipps did not write a simple biography. Instead, he wrote Age of Cage, a book that looks at Cage’s career as a tale about the film industry at large. It is a saga of a risk taking actor finding work in an environment less and less prone to risks.

Keith Phipps joins the show to talk about his new book and how doing research for it has changed his opinion about Nicolas Cage. He also breaks down some of his favorite Nick Cage roles and shares how he makes sense of the actor’s resurgent career now.

Liked Why Nicolas Cage is one of the most fascinating actors working today? Listen to these next...