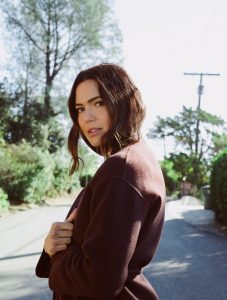 Mandy Moore on her new album In Real Life

Mandy Moore first rose to stardom with her hit single Candy in 1999. It was her first-ever single and went certified gold. Candy made Mandy a teen pop star, following the steps of her peers Britney Spears, N’Sync and the Backstreet Boys. But she never wanted to be just a pop star – she had dreams of performing on stage and screen and writing her own music. And for the last 20+ years, Mandy has been doing just that.

She’s starred in movies like Saved, The Princess Diaries and I’m Not Here. On TV she’s appeared on Grey’s Anatomy, Scrubs and This is Us, the smash-hit, beloved drama that just finished its 6-year run on NBC. Mandy played Rebecca Pearson on the show, a role that earned her Screen Actors Guild and People’s Choice awards, along with Emmy and Golden Globe nominations.

When production wrapped on This Is Us, Moore found herself at a bit of a crossroads in her career. She’d started writing music again during her first pregnancy, and decided to record it. With help from her husband Taylor Goldsmith and a few musician friends, she released In Real Life, an album based on the acknowledgment and celebration of her journey in life. Mandy is currently gearing up for her first North American tour in over a decade, in support of her new album.

Mandy joins us on Bullseye to discuss wrapping the show, her new album, and what it was like to have a baby in a pandemic.

Liked Mandy Moore? Listen to these next...