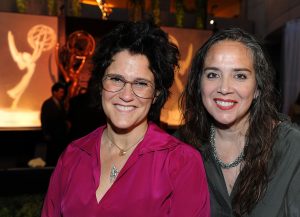 We’re dedicating this week’s show to music duo Wendy and Lisa. The two are veteran composers and singer/songwriters. They were integral members of Prince’s Revolution.

Wendy Melvoin and Lisa Coleman were born in the ’60s, and were childhood friends. Both of their fathers were members of the legendary Wrecking Crew; a collective of session musicians based in Los Angeles who recorded with just about everyone between the ’60s and ’70s.

In their early 20’s, they started dating. Around that same time, Lisa started playing keys and singing for Prince. You can hear her work on Prince’s breakthrough, Dirty Mind.

Soon after, Wendy joined on guitar. Together they recorded some stone cold classics with The Revolution: Purple Rain, Raspberry Beret, Kiss, When Doves Cry and more.

They left the Revolution in 1986. They released a few albums of their own under the name. All these years, Wendy & Lisa have kept collaborating – even long after they broke up as a couple.

They do a lot of work composing scores for TV and movies: Heroes, Dangerous Minds, Crossing Jordan and Nurse Jackie. Their latest work can be heard on Cruel Summer, the new teen thriller from Freeform.

Wendy and Lisa talk with us about their 40-plus year partnership, and their Emmy award-winning work as composers.  They’ll reflect on their childhood friendship and the work their fathers contributed as members of The Wrecking Crew. And of course, what it was like to collaborate with Prince, and work on some of his most iconic records.

Liked Wendy and Lisa, Emmy winners and integral members of Prince’s Revolution? Listen to these next...