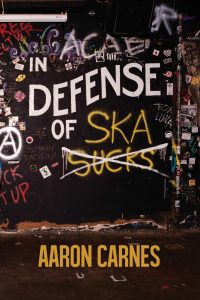 Canonball is a segment on Bullseye that gives us a chance to take a closer look at albums that should be considered classics, to find out what makes them great. This time, the writer Aaron Carnes tells us why Crab Rangoon by MU330 deserves to join the canon of great pop records.

Aaron is a music journalist and the editor of Good Times, a weekly newspaper in Santa Cruz, California. He also just wrote a book called In Defense of Ska, which, well, does what it says on the tin. It champions not just the critically acclaimed, punk-adjacent two-tone bands of the late ’70s and ’80s, or the pioneering Jamaican bands from the 60s. In Defense of Ska offers a full-throated defense of ska’s third wave. That means Reel Big Fish, Operation Ivy, Fishbone, The Mighty Mighty Bosstones and more.

But when we asked Carnes if he wanted to elevate one ska album into the canon of great pop records, he didn’t go for any of that. He picked a band that, unless you’re currently wearing black-and-white vans, you may have never heard of.

Instead, he went for Crab Rangoon by MU330, a ska band from St. Louis. He puts the album in the context of the entire third-wave movement, and explains that the album shows how ska can be more complex and serious than you might think.

Liked Canonball: Aaron Carnes on third-wave ska? Listen to these next...