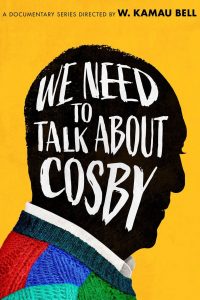 On the latest episode we talk with W. Kamau Bell. He’s a longtime friend of the show, and a terrific standup comic. He hosts the CNN show United Shades of America, and before that the FXX show Totally Biased.

Bill Cosby is one of the most successful TV and stand-up comedy stars of all time. He’s also been accused by more than sixty women of sexual assault. He was convicted of sexual assault in 2018, though he was released from jail last year when his conviction was overturned on technical grounds.

The documentary includes first-hand testimony from women describing Cosby actions. It’s also about what Cosby means, and how we – all Americans, but especially Black Americans like Kamau – can deal with what he did.

It’s a complicated, difficult topic. One that intersects with the fabric of the American entertainment system, with race, the justice system, the MeToo movement and so much more.

In this conversation we talk with Kamau about the documentary at length. He talks about what Cosby meant to him as a kid and as a comic. He talks about Cosby’s pioneering work in civil rights and in television, and about how we struggle to square all that with the person we now know Cosby to be.

We Need To Talk About Cosby will be available to watch via Showtime on January 30.

Liked W. Kamau Bell on ‘We Need to Talk About Cosby’? Listen to these next...