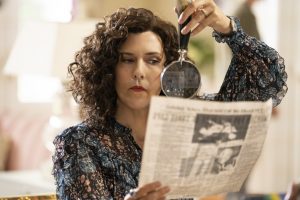 The Righteous Gemstones just kicked off its second season on HBO, and that’s good news.

It’s a comedy about this family, the Gemstones. They’re pastors and owners of a massive megachurch with hundreds of thousands of followers. The family centers around Dr. Eli Gemstone, the patriarch, who’s been preaching on TV for decades; he’s played by John Goodman. But the show itself centers around Eli’s kids: their power struggles, their scheming, their scandals, their hamfisted attempts to curry favor with their father.

McBride stars as Jesse, the oldest son. He’s a boorish, overconfident dummy who constantly finds himself in over his head. So, pretty much every Danny McBride character ever. There’s Kelvin, the cool, young one who pretty much exclusively wears Affliction t-shirts, ripped jeans and patterned sport coats. He’s played by Adam Devine.

And there’s Judy, played by Edi Patterson. On a show that is absolutely stacked with comedic heavyweights – Goodman, McBride, even Walton Goggins – Judy Gemstone stands out. She’s got this kind of manic energy: she alternates between total confidence in everything she does to massive insecurity. She doesn’t have much filter and a very, very short temper – in the first season, Judy demolishes both a vending machine and an SUV.

We’ll talk about Edi’s own church experience, improvising – and “Misbehavin,'” the Christian country tune from season 1 she sang on and co-wrote.

This interview originally aired in October of 2019.

Liked Edi Patterson? Listen to these next...