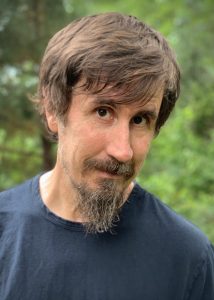 I Wish I Made That is a segment where we invite some of our favorite voices in pop culture to dive deep into a work of art they did not make but they really wish they did. This time around we are joined by John Darnielle.

John is a writer whose 2014 debut novel Wolf in White Van was nominated for a National Book Award. He recently released his third novel which is called Devil House. It is an epic story that touches on the true crime fad of today, the Satanic panic of the 1980s and a spooky home in Milpitas, California. Along with fiction, he also writes a column for Decibel Magazine.

You might also know John Darnielle for his other gig as a singer, songwriter and frontman of the folk rock band the Mountain Goats. John started the band all by himself back in the early 90s and they have since put out over two dozen albums, including last year’s Dark in Here.

When we asked John to pick something he wished he had made, he sent us a list of a few different things. After narrowing down the list, he eventually settled on Speak & Spell, the debut album by new wave legends Depeche Mode.

Liked I Wish I Made That: John Darnielle of the Mountain Goats? Listen to these next...