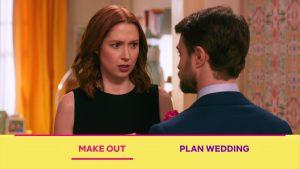 Tina Fey and Robert Carlock are comedy legends. It’s a title well earned as they’re the brains behind two of the funniest TV series ever, 30 Rock and Unbreakable Kimmy Schmidt.

Of course, Tina Fey is best known for her stint as Head Writer, Weekend Updater, and sometime performer at Saturday Night Live. That’s where she met Robert Carlock and they forged a creative partnership that has gifted us with some of the best TV comedy of the last twenty years. It’s their signature comedic tone – absurd jokes and the slightly absurdist world they take place in – that keeps fans of their work coming back for more.

They co-created 30 Rock, of course. A show that revolutionized TV comedy. A show with more jokes per minute than… pretty much anything that came before it. 30 Rock follows Liz Lemon, played by Fey, and chronicles her experiences as the head writer of a late-night sketch comedy show called TGS — loosely based on Saturday Night Live. While a lot of 30 Rock deals with Liz managing volatile cast members, a staff of lovable but immature writers, and a string of subpar boyfriends, at the core of the show is the close relationship between Liz and her boss, NBC executive Jack Donaghy, played by Alec Baldwin. Its mix of absurd humor and occasional heartwarming pathos is what made it one the best sitcoms on television, beloved by both loyal fans and critics. The show ran for seven seasons and won several Emmys and Golden Globes.

After it ended in 2011, Fey and Carlock followed up 30 Rock with Unbreakable Kimmy Schmidt. Unbreakable… is about a woman, Kimmy Schmidt — played by Ellie Kemper, of The Office and Bridesmaids fame — who spent much of her childhood captive in a bunker run by a cult leader. It follows Kimmy making a new life for herself in New York City after her rescue from the bunker. She is endlessly optimistic, courageous and positive but often her naivete, coupled with the misguided help of her friends Titus, Lilian and Jacqueline, leads her into various, very funny mishaps. The show is hilarious and – like 30 Rock –  a brilliant ensemble comedy that is so joke dense it invites numerous re-watches.

Unbreakable Kimmy Schmidt wrapped its fourth and final season early last year. But, now it’s back! Tina and Robert reunited the cast for a special called Kimmy Vs The Reverend.

In the new interactive special from Netflix we find Kimmy as a famous author. She’s about to marry a prince but the cult Reverend from her past has cooked up an evil plot. In Kimmy vs The Reverend the viewer decides what Kimmy should do. There’s big plot changing decisions and some of the choices are quite small. Should Titus, her roommate, take an Uber or walk, for example? Does Kimmy want to make out with her guy or plan a wedding? And what kind of wedding dress will Kimmy wear?

Oh yeah, by the way, Kimmy’s getting married to a fancy Prince. Played by Daniel Radcliffe.

We’ll chat with Tina and Robert about what projects they have in the works, how they discovered that their talented day player, Tituss Burgess was a Broadway star, and why as long as there are jokes to be written, they’ll keep writing ’em together.  All that and more on the next Bullseye!

Unbreakable Kimmy Schmidt: Kimmy vs The Reverend is streaming now on Netflix US.

Liked Tina Fey and Robert Carlock? Listen to these next...