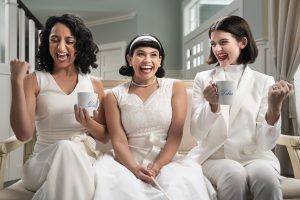 The creators and stars of comedy group Three Busy Debras on their new Adult Swim show
Maybe you’re looking for a distraction. Maybe it’s a TV show. One that can transport somewhere else. Perhaps it’s a world where iguanas are mail carriers, and lawn hedges are trimmed with shaving cream and razors.

Three Busy Debras is a weird show. It takes you from our current uncertain, kind of scary world and sets you down in the fictional town of Lemoncurd, Connecticut. It’s a pristine, filthy rich suburb where pretty much everyone drives SUVs and owns a huge, perfect house.

It follows the day-to-day lives of three housewives. All named Debra. They’re all a bit deranged. They brunch a lot. They kind of hate each other, but they hang out all the time, too.

Despite the polished superficial exterior there’s a lot of strange things that make the show surreal, off-beat, hilarious, and totally unique.

The show stars Sandy Honig as Debra. Mitra Jouhari as Debra. And Alyssa Stonoha as… Debra. The concept originally began as an improv show. Then as a play which sold out Carnegie Hall with the help of a Kickstarter in 2016.

We’re joined by the creators and stars of Three Busy Debras to talk about the new Adult Swim show and it’s truly bizarre, hilarious antics. They’ll explain what it means to be a Debra, and where they initially got the idea of the Debras. Plus, what it was like to perform at Carnegie Hall and why they still think about the venues seating chart.

Liked The creators of Adult Swim’s ‘Three Busy Debras’? Listen to these next...