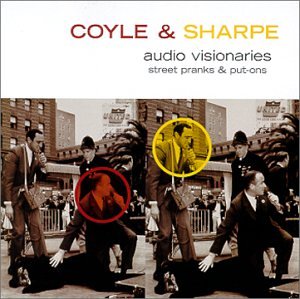 This week, we’re doing something a little different: looking back on the work of Jim Coyle and Mal Sharpe. Two brilliant comedians, decades ahead of their time.

The comedy duo recorded a series of hilarious and bizarre man-on-the-street records in the 1960’s.

These two guys, Coyle and Sharpe, would walk the streets of San Francisco with a tape recorder – it was hidden in a briefcase, or sometimes it was out in the open.

They’d approach people with usually an absurd proposition: let’s rob a bank together. Let’s give a stranger a child. Let’s become one person – all all three of us. Deeply weird and deeply funny questions.

It’s called a man on the street interview. You’ve seen it a hundred times. A reporter goes out onto a busy sidewalk, asks passersby what they think of the president or the economy or a dress somebody wore at an awards ceremony.

You’ve seen that idea used for comedy, too. Maybe it was on the Daily Show, or Jaywalking, or Eric Andre. Coyle and Sharpe basically invented that genre back in the early 1960s. And they pretty much perfected it, too.

Jim Coyle died in 1993. Mal Sharpe died this past March. He was 83. We’re taking time to remember the comedy duo by revisiting a couple conversations with Mal Sharpe.

The conversations are some of the first celebrity interviews on the show, back when it was called The Sound of Young America. They were recorded live from Jesse Thorn’s college radio station, KZSC nearly two decades ago. We’ll also listen to some classic Coyle and Sharpe vox populi interviews.

Liked Remembering Coyle and Sharpe, groundbreaking comedy duo? Listen to these next...