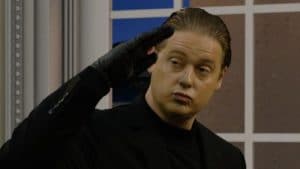 Tim Heidecker on the Craziest Day of his Entire Career

The Craziest F**king Day of my Entire Career is a segment where we let some of our favorite people tell us the wildest stories from their careers time in showbiz. This time it’s Tim Heidecker, a comedian, actor and creator of intricate worlds in which he often plays a fictionalized version of himself.

For one, he is half of the very funny comedy duo Tim and Eric. A partnership that has spawned four TV shows, countless tours and a feature length film. The two are set to tour again early 2020.

He also hosts Adult Swim’s On Cinema At The Cinema, along with Gregg Turkington. Together the two review movies in a fictional universe that seems to be ever expanding. In 11 seasons and going strong Tim has nearly killed himself with new age medicine, overdosed on nutritional vaping systems and performed in corny electronic music acts.

Tim’s character from On Cinema is also the star and creator of another show, a low-budget action thriller called Decker. His character, Special Agent Jack Decker, is a spy that could easily be the illegitimate spawn of Trump and Chuck Norris. He’ll tell us about a time when his character was just a little too on the nose, just a little too close for comfort.

Most recently, Tim’s character ran for District Attorney in the county of San Bernardino, California. That campaign is the subject of his new movie Mister America. Stream it or download it online.

Liked Tim Heidecker on the Craziest Day of his Entire Career? Listen to these next...