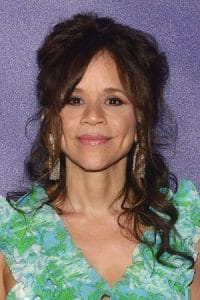 Rosie Perez is one of the most fascinating people we’ve had on Bullseye. Straight up

She’s had truly iconic roles in films like White Men Can’t Jump and Do The Right Thing, where she was introduced with an electrifying opening credits scene that is still talked about to this day. She was nominated for an Academy Award for her role in 1993’s Fearless where she played a young woman dealing with guilt and trauma following a deadly plane crash and she’s performed on stage and screen in countless other projects.

She’s been a host on ABC’s The View, and co-founded the Urban Arts Partnership—a long-running New York nonprofit that works in education and the arts. She’s served as Grand Marshal for the International Boxing Hall of Fame— make no mistake, she knows her stuff— and as if all of that weren’t enough, she was a powerhouse choreographer for “In Living Color” where she helped introduce hip hop acts like Heavy D to the mainstream.

A native of Bushwick, Brooklyn, she grew up in a convent, overcoming abject poverty and emotional abuse. She got her first big break on Soul Train as a dancer and was one of the first to bring a hip hop style of dancing to television back when most were still doing the hustle.

Rosie chats with Jesse about surviving her difficult childhood, living with PTSD and why she’ll always have a soft spot for the suburbs. Plus, she’ll tell us why she prefers the New York hustle and bustle over sunny Los Angeles. Rosie speaks with us from the heart and we’re so happy to have her on the show.

You can catch Rosie in the much-anticipated Birds of Prey: And the Fantabulous Emancipation of One Harley Quinn in 2020 but in the meantime go back and watch some of her past performances like her turn as a crooked cop in Pineapple Express and her work on TBS’s darkly comedy Search Party where she steals every scene that she’s in.

You can also click here to support her non-profit, Urban Arts Partnership.

Liked Rosie Perez? Listen to these next...