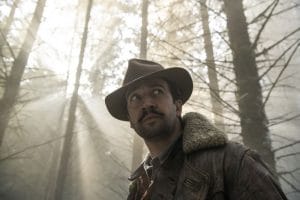 Lin-Manuel Miranda, the one and only! He grew up in a working class neighborhood north of Harlem. He went to a fancy school for gifted kids on the Upper East Side, went to college at Wesleyan. And not long after he graduated, he had a hit Broadway musical with In The Heights.

He also created and starred in the most influential musical this century has seen: Hamilton, of course.

These days, he’s got another show on Broadway: Freestyle Love Supreme. It’s an improvised hip-hop performance where the performers get their prompts from the audience. Think of the best of freestyle hip hop and improvised comedy, and you get a sense of what you’re in for at the show.

He’s also starring in the new HBO show His Dark Materials. It’s a fantasy series based on the book by the same name. It centers around a young girl named Lyra who’s trying to find a kidnapped friend. Lyra grew up in Oxford, UK, but her journey takes her far from her home to a desolate and dangerous region known as The North. There, she meets a guy named Lee Scoresby, played by Lin-Manuel.

Lin-Manuel Miranda talks about how his career has changed since Hamilton. We’ll also talk about the time he turned down a part in a Marvel movie.

Check out His Dark Materials is on HBO. Freestyle Love Supreme is running now on Broadway through January 12 at the Booth Theatre.

Liked Lin-Manuel Miranda? Listen to these next...