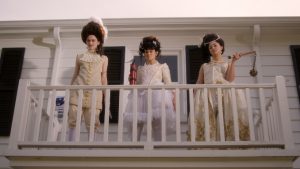 The creators and stars of Adult Swim’s Three Busy Debras

In a time where there is a lot going on in the world, it is nice to have a break every once in a while. To find something silly, something weird and something that can transport you somewhere else completely.

Perhaps to a place where iguanas are mail carriers, one where ATMs sprout from the ground in the city park and lawn hedges are trimmed with shaving cream and razors.

Lemoncurd, Connecticut, is one such place. It is a pristine, filthy rich suburb where pretty much everyone drives SUVs and owns a huge house. Lemoncurd is the fictional setting for the Adult Swim show Three Busy Debras, which is sublime, bizarre and a little disturbing.

It follows the day-to-day lives of three housewives who are all named Debra. They are all a bit deranged. They brunch a lot and kind of hate each other, but they hang out all the time too.

Despite the polished superficial exterior there is a lot of strange things that make the show surreal, off-beat, hilarious and totally unique.

The show is well into its second season and it is just as weird and funny as ever. In 2020, the stars of the show joined Bullseye to talk about the new Adult Swim series and its truly eccentric and hilarious antics. They also explained what it means to be a Debra, and where they initially got the idea of the Debras. Plus, what it was like to perform at Carnegie Hall and why they still think about the venue’s seating chart.

This interview originally aired in May of 2020.

Liked Three Busy Debras? Listen to these next...