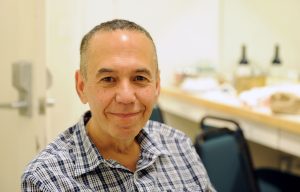 You probably remember him for his signature loud voice or his off-color jokes. To millennials of a certain age, he was an iconic voice actor: Iago in Aladdin, Kraang Subprime in Teenage Mutant Ninja Turtles and the voice of Aflac Duck commercials.

Gottfried was also a beloved, boundary-pushing standup comic. When he’d hit the stage, he’d become a character. He’d squint his eyes, scream at the top of his lungs, and tell jokes that, frankly, only Gilbert Gottfried could get away with.

That wasn’t the Gilbert Gottfried his friends and family knew, of course. And through most of his life, he was always reluctant to show that second side of himself to the public. Actually, he confessed that he was kind of terrified. The real Gilbert was quiet, sensitive and friendly.

This week, we’re taking a moment to remember Gilbert’s life by revisiting our conversation from 2017. At the time, he joined us to talk about the documentary Gilbert, which profiled the life and work of the comic. The film showed Gilbert for who he really was: a complex guy who of course doesn’t shout all the time, who loves his family, who walks to the end of the block to get paper towels or whatever.

The director, Neil Berkeley, tagged along with Gottfried to gigs, went to his home and interviewed his wife and children. And what it shows you is a portrait of a brilliant, complex comedian – one whose work had gotten him into trouble plenty of times.

In this conversation, Gilbert talked about what it was like to star in a documentary about his life, and why he struggled watching parts of the film. Plus, we dive into some of the Twitter jokes that got him into trouble over the years.

This conversation also features segments that were previously unaired including Gilbert’s thoughts on his early career, and he expands on finding jokes from the worst possible situations.

This interview originally aired in October of 2017.

Liked Remembering Gilbert Gottfried? Listen to these next...