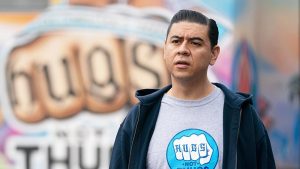 Chris Estrada is a stand-up comedian. He was born and raised in South Central and Inglewood in Los Angeles.

He even kept working at the warehouse after he sold the show Hulu. Because, he says, the pandemic had just started, and why give up a stable gig at such an uncertain time? So he gave it a few more months to, you know, make sure it was real.

Chris joins us to talk about that tv show: This Fool. The show was co-created by Chris, and he stars as the show’s main character: Julio.

Julio lives in South Central Los Angeles where Chris grew up, but the show is not autobiographical.

Julio works at a local nonprofit that helps former gang members adjust to life on the outside. The show follows the misadventures of Julio and his cousin Luis who has finished up a lengthy prison sentence. The show is funny, human, unexpected and at times, surprisingly sweet.

We talk with Chris about co-creating This Fool, his love of hardcore music and his late start as a stand-up comedian. Plus, he’ll discuss creating the character Luis on the show, and how he kept him from coming off as a stereotype.

Liked ‘This Fool’ star and creator Chris Estrada? Listen to these next...