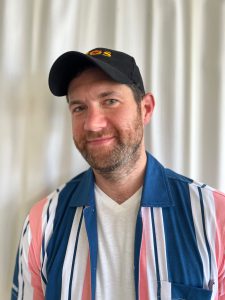 Billy Eichner was already a working comedian when he rose to fame as the host of Billy on the Street – a bonkers game show where he runs up and down the streets of Manhattan shouting questions at strangers. This propelled him onto other shows, like the excellent TV comedy Difficult People, alongside Julie Klausner. He played the loud-talking Craig on Parks & Recreation. He even did the voice of Timon in the recent Lion King reboot.

Now, he’s written and starred in his first movie.

Bros is a romantic comedy, produced by Judd Apatow, about a same-sex relationship. Bros features an entirely queer cast – the first of its kind from a major studio.

Billy stars as Bobby Leiber, a podcast host who also works at an LGBTQ+ History Museum. He’s a single man who never settled down. And then, on a night out, he meets Aaron. Aaron is attractive, fun to hang out with, and not especially serious.

But eventually, Bobby sees potential with Aaron. A relationship develops, and the relationship gets put to the test. If that sounds like a classic rom com plot, well, it kind of is. But it also kind of isn’t. Bros is true to the world it lives in: a world with Grindr, with poppers, with thruples. It’s what makes the movie unique and funny in a refreshing way. Will they end up together and live happily ever after? We can’t spoil it. Billy joins us to talk about his favorite parts of creating Bros.

Liked Billy Eichner? Listen to these next...