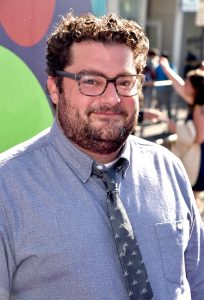 When Bobby Moynihan was a kid, one of his favorite activities was putting on a fancy suit and pretending like he was hosting Saturday Night Live. His mom would even get the camcorder out and introduce him like he was famous. That comedic enthusiasm would eventually carry him right toward his dream.

In 2008, Bobby Moynihan was cast on SNL and starred on the show for nearly a decade. He did a few impressions, but his strength was portraying offbeat characters. This talent led him to his first voice-over role in 2013 as Chet Alexander in Monsters University. When Bobby left SNL in 2017, he began to appear in a variety of projects; shows like Unbreakable Kimmy Schmidt and movies like The Secret Life of Pets. He recently played Jaden Kwapis on the NBC sitcom Mr. Mayor. In his free time in-between projects, Bobby began writing.

He created Loafy, the series of shorts about a cartoon, drug-dealing manatee of the same name. Lightning Wolves came next. It launched earlier this year on Comedy Central and is an adult send-up of late 20th century animated shows like Captain Planet and Transformers.

Bobby recently transferred that same passion for writing into the book world. He just published his first children’s book, Not All Sheep are Boring. It follows the adventures of sheep who actually lead rich, interesting lives and have hobbies like drinking coffee, metal detecting, and eating pasta.

Bobby joins Bullseye to talk about his comedy career and new book, available in stores now.

Liked Bobby Moynihan? Listen to these next...