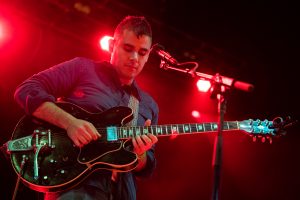 The Song That Changed My Life is a segment that gives us the chance to talk with some of our favorite artists about the music that made them who they are today. This time around we’re joined by singer songwriter Rostam.

He got his start as a member of Vampire Weekend. He produced the band’s first three records, including some of their biggest hits.

He’s since left the band, but keeps busy producing. He collaborated on a record with Hamilton Leithauser of the Walkmen in 2016, followed that up with his solo debut, and produced the acclaimed Haim record Women in Music Pt. III.

Rostam joins us to talk about The Coast by Paul Simon. A lot of critics consider Graceland to be Simon’s masterpiece, but as Rostam tells it, The Coast from the album The Rhythm of the Saints is also a rewarding listen.

Rostam explains how the song helped him visualize and produce the first Vampire Weekend album. Plus, he’ll shares a story about the time he met Paul Simon when the band performed on SNL.

Liked The Song That Changed My Life: Rostam? Listen to these next...