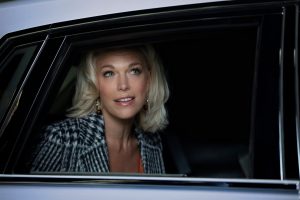 It’s a unique challenge for an actor to play a villain in a movie or TV show that isn’t just compelling to watch, but also a person you can sympathize with and maybe even relate to.

On Ted Lasso, there’s a character named Rebecca. Ted Lasso is a sitcom about an American football coach who finds himself in London, coaching a soccer team. If you haven’t seen the show’s first season, get ready for some spoilers.

Hannah Waddingham plays the part of Rebecca in the show, the owner of a professional soccer team called AFC Richmond. When the show begins, she just inherited the team in a divorce settlement. As the new owner, one of her first decisions is to hire an American college football coach named Ted, played by Jason Sudekis, to lead the team.

If it seems like a bad idea, well, Rebecca would agree at first. Her goal in hiring Ted is to ruin the team and make it a joke in the British press. The team, she says, is the only thing her ex really loved.

But as the show goes on, you learn more about Rebecca. You find out about the humiliation and heartbreak she endured during her marriage. Over the course of the series, you see her change and give up on revenge. She begins to find inspiration and joy through Ted and the rest of the team.

For many actors, the part could easily become a cliche with a transformation that is unearned and hard to believe, but Hannah Waddingham is not like most actors.

Playing Rebecca, she commands authority, but almost always with vulnerability peeking through. She balances pain, anger, and compassion in a way that it’s impossible to imagine anyone else playing the role.

Hannah is up for an Emmy for her part in the show, and if you’ve seen it, it’s not hard to imagine why. You can catch her stellar performance on Ted Lasso’s second season, which is streaming new episodes weekly right now. You can also start from the beginning with season one. Both are available to stream on Apple TV+.

Hannah has been performing for decades now, but you probably haven’t seen her on screen that much. She is originally a stage performer and had award winning parts in shows on Broadway and London’s West End. She’s performed in Into the Woods, Spamalot, Kiss Me, Kate and others.

She joins guest host Linda Holmes of NPR’s Pop Culture Happy Hour to chat about her role in Ted Lasso. Plus, she talks about her years of performing in theater and even shares what it’s like to perform in an award-winning musical when a mouse is stuck in your dress.

Liked Ted Lasso’s Hannah Waddingham? Listen to these next...