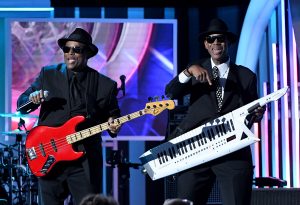 Jimmy Jam and Terry Lewis have been working together for 40 years, producing some of the biggest R&B records of all time.

In their four decades of working together, the fedora-wearing giants of R&B music have written and produced over 40 top-ten hits. They’ve worked with Prince, Babyface, Usher, Mariah Carey — and Janet Jackson, starting with 1986’s Control.

Control was a departure for Janet. She’d stopped working with her father, and brought on Jam and Lewis instead, as producers and songwriters. And it was a hit! It went platinum five times over, and earned an Album of the Year nomination at the Grammys.

The record not only launched Janet’s career, but also the careers of Jam and Lewis. They brought a fierce-but-precise energy to the record that producers to this day still aspire to, and they went on to work together on more than half a dozen Janet Jackson records.

All that producing hadn’t left them a lot of time to write songs of their own, but lucky for us, that’s changed.

This past July they released their first ever album as recording artists. It’s called Jam & Lewis, Volume 1. Here’s a song called “Spinnin,'” featuring the one and only Mary J. Blige:

The music legends join Bullseye to talk about the new album, the hits they contributed vocals to, and the jaw-dropping synthesizer work they do on the Janet Jackson single “Love Will Never Do.”

Liked Jimmy Jam and Terry Lewis? Listen to these next...