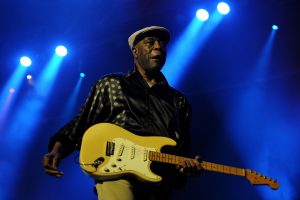 The Song That Changed My Life is a segment that gives us the chance to talk with some of our favorite artists about the music that made them who they are today. This time around, we’re joined by guitarist Buddy Guy.

Buddy is one of the greatest blues guitarists alive today. Buddy’s shared stages with legends like B.B. King, Howlin’ Wolf, and Muddy Waters. He’s won eight Grammy awards, he’s been in the rock and roll hall of fame since 2005, and he’s performed for presidents.

From his home studio in Chicago, Buddy took us back to his childhood in Louisiana. He explains how John Lee Hooker’s song Boogie Chillen’ encouraged  him to learn the guitar in his early teens. Plus, he shares a story about getting to meet his hero, John Lee Hooker; and becoming friends with him, too.

Recently, Buddy was the subject of an episode of the PBS American Masters series, where he talked about his creative process and career. Check out Buddy Guy: The Blues Chase The Blues Away on your local PBS station or on PBS.org.

Liked The Song That Changed My Life: Buddy Guy? Listen to these next...