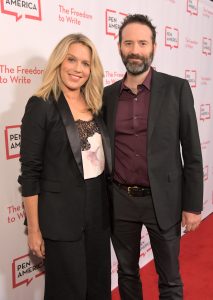 Jessica St. Clair and Dan O’Brien on how their battles with cancer inspired their work

Content Warning: This interview contains a lot of talk about cancer including topics around body parts and exams. It also includes conversations around the pain and scariness that come with it and other cancer related topics that some listeners might be sensitive to.

Jessica St. Clair is a comedy writer and actor. Alongside Lennon Parham, she created and starred in the comedy series Playing House, which aired for three seasons on USA. Dan O’Brien is her husband of 15 years and works as a poet and playwright. He is also a former Guggenheim fellow whose work has shown off-Broadway and in London.

Jessica and Dan have experienced and survived cancer together. They both had separate diagnoses and different treatments. A few years back, Jessica discovered a lump on her breast and It didn’t take long for doctors to diagnose her with breast cancer. Following her diagnosis she quickly started treatment. Then, improbably, doctors diagnosed Dan with stage 4 colon cancer that had spread to his liver.

It was an intense and frightening time for both of them. And, as they recovered, it inspired their work. For Jessica, cancer became a central plot line in the third season of Playing House. For Dan, it became a book called Our Cancers.

In the book, Dan uses poetry to chronicle the year and a half he and Jessica spent going to doctors, getting treatment, and raising their child.

Jessica and Dan join Bullseye to talk about Our Cancers and the year and half of being treated for cancer that inspired it. They also talk about how their battle with cancer affected their child, their relationship, and their careers.

Liked Jessica St. Clair and Dan O’Brien? Listen to these next...