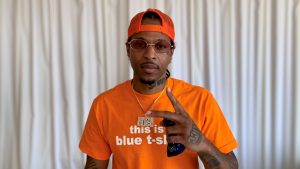 Rapper G Perico on Play 2 Win, his sound, and more

G Perico is a gangster rapper from Los Angeles. That puts him firmly in a tradition stretching from Ice T and the DOC in the 80s through Ice Cube and Snoop Dogg in the 90s and on to hitmakers like The Game and YG in the 21st century. He is a master stylist. His nasal voice cuts up heavy beats and his lyrics are by turns playful and brutal, often both in one song.

G Peirco was born Jeremy Nash and grew up in South Central Los Angeles. His life was hard. He grew up in the kind of neighborhood where, broadly speaking, you either had friends who rolled with gangs, or you didn’t have friends.

He has been arrested and been to the youth authority, to jail and to prison. He has been shot at and been shot. He talks about his lived experiences in his music. He raps about the LA he grew up in from cookouts and car shows. And where there is always danger around the corner.

G Perico broke through in 2016 with his project S**t Don’t Stop. That record established him at the vanguard of LA street rap. In the five years since, he has recorded nine albums. He has also collaborated Freddie Gibbs, Kamasi Washington, Nipsey Hussle, and E-40. This year he has dropped several projects, with the latest being called Play 2 Win.

He joins Bullseye and reflects on his upbringing, the music he listens to, and embracing his imperfections. He also talks about his creative process and his love for writing. Plus, he talks with Jesse about the people in his life that influenced his signature hair style.

Liked G Perico? Listen to these next...