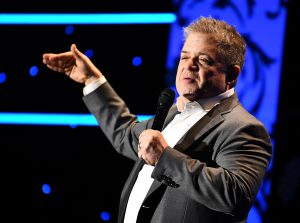 The Craziest Day of My Entire Career is a segment that gives us the chance to talk with some of our favorite people about the weirdest workday they have experienced so far. This time around, we’re joined by the one and only Patton Oswalt.

You probably know who Patton Oswalt is by now, right? He’s an Emmy and Grammy award winning standup comic. He played the voice of Remy in the Disney Pixar film Ratatouille. He’s also a hilarious comic actor with the skills for drama, too.

Patton’s latest project is a new movie called I Love My Dad. In it, he plays Chuck, a single man in his fifties who has an adult son in his named Franklin. Chuck and Franklin have always had a strained relationship, and when the movie begins, Franklin blocks his dad from his phone and on social media. To get around the block and connect with his son, Chuck poses as a woman online, but things get complicated when Franklin wants to meet her in person.

When we asked Patton about the craziest day of his entire career, well he didn’t have to spend too long thinking about it. He took us back to the time he declined a free ride in the Planters Peanut Mobile only to be party to an intense, harrowing road rage battle.

Liked The Craziest Day of My Entire Career: Patton Oswalt? Listen to these next...