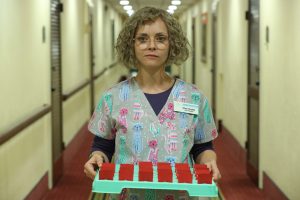 In the ’90s, Christina Ricci was everywhere: The Addams Family. Casper. Now and Then. She’s one of the biggest child stars of that era.
But Ricci didn’t want to be a child star. She didn’t like kid’s movies. As soon as she could, she started taking grown up parts. Artsy, boundary pushing, grownup parts: Fear and Loathing in Las Vegas. The Ice Storm. Buffalo 66. The Opposite of Sex. Iconic movies.
Showbiz is a fickle thing, though. And while, in those ensuing years, Ricci kept working… she wasn’t getting as many of those big, thrilling dream parts.
But things changed in 2019, when she was cast in the TV series Yellowjackets. The show, which premiered on Showtime in 2021, is about a group of teenage girls who survive a horrific plane crash. The timeline on the show alternates between the crash itself, and nowadays, where the adult survivors are forced to sort through their trauma.
Christina portrays the adult version of Misty on the show. She’s been called one of the most terrifying characters on tv, but she’s also become a fan-favorite of the show despite her unsettling tendencies.
For the first time in over 15 years, she’s up for an Emmy for Best Supporting Actress in a Drama Series.

Correspondent Jordan Crucchiola geeks out with Christina about all things Yellowjackets. Plus, they’ll discuss what it was like to be a child actor and the unique, fascinating arc her career has taken. Christina also talks with Jordan about why taking on comedic roles makes her deeply uncomfortable – even though she’s played in plenty of great comedic roles.

Liked Christina Ricci? Listen to these next...