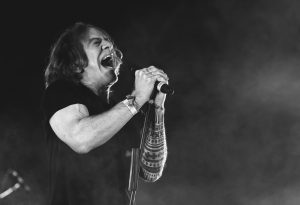 Danny Elfman is an award-winning composer that has made some of the most iconic, recognizable music over the last half a century. He made a triumphant return to live music at Coachella this year, playing for the first time in 30 years.

In 1985, he scored his first film: Pee-Wee’s Big Adventure, followed soon by other iconic movies like Batman, Beetlejuice, Mission Impossible, and The Nightmare Before Christmas.

Overall, Danny has scored well over 100 movies and TV shows, won numerous awards, and is beloved by music and film fans across the globe.

After building such a legacy, he’s earned a break. Danny could rest comfortably and take it easy for a minute. But Danny Elfman isn’t into taking it easy.

Last year, he released his first rock album in over 3 decades: Big Mess. And this year, he’s followed it up with another album: Bigger, Messier. The album features remixes of songs from Big Mess from artists like Trent Reznor, Xiu Xiu, and Iggy Pop.

And about that Coachella set? If you missed it, you’ll have two more chances to see it live. He’s performing an extended version of that set this October 28th and 29th at the Hollywood Bowl.

Conducting the interview with Elfman is our correspondent Brian Heater, an editor at TechCrunch and host of the podcast Recommended if You Like – or just RiYL, where he interviews musicians, cartoonists and more.

Liked Danny Elfman? Listen to these next...