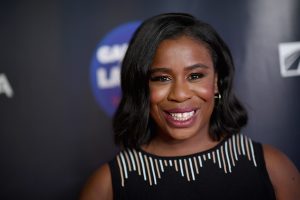 It was on Orange is the New Black, a part of the first class of original TV shows on Netflix. Crazy Eyes, whose real name is Suzanne, had, well, crazy eyes. She was one of the many prisoners in the women’s correctional facility the show focused on. Crazy Eyes didn’t talk a lot. Watching the show, at first, you might not know whether or not she was comic relief, or a real threat to other characters’ safety.

But as the show goes on, her character rounds out. We learn why she’s in prison, we learn about her parents, her struggles with mental illness.

So it’s easy to see why Uzo Aduba won two Emmys for her portrayal of Suzanne, one for comedy and the other for drama. That’s an honor shared by only one other person: none other than Ed Asner.

Since Orange is the New Black, Aduba has gone on to even bigger and better things. She played Shirley Chisolm in the Hulu miniseries Mrs. America. She’s performed on Broadway. And, recently, she’s starred in the HBO series In Treatment.

So we’re thrilled to have Uzo Aduba on the show, and just as excited to have our good friend Tre’vell Anderson interviewing her. Tre’vell is a veteran entertainment journalist and co-host of the Maximum Fun podcast FANTI.

Liked Uzo Aduba? Listen to these next...