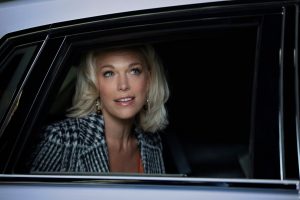 It’s a unique challenge for an actor to play a villain in a movie or TV show that isn’t just compelling to watch, but also a person you can sympathize with.

On Ted Lasso, there’s a character named Rebecca. Ted Lasso is a sitcom about an American football coach who finds himself in London, coaching a soccer team. If you haven’t seen the show’s first season, get ready for some spoilers.

Hannah Waddingham plays the part of Rebecca in the show, the owner of a professional soccer team called AFC Richmond. When the show begins, she just inherited the team in a divorce settlement. As the new owner, one of her first decisions is to hire an American college football coach named Ted, played by Jason Sudekis, to lead the team.

Her goal in hiring Ted is to ruin the team and make it a joke in the British press. The team, she says, is the only thing her ex really loved. But as the show goes on, you learn more about Rebecca. You find out about the humiliation and heartbreak she endured during her marriage.

Over the course of the series, you see her change and give up on revenge. She begins to find inspiration and joy through Ted and the rest of the team.

For many actors, the part could easily become a cliché with a transformation that is unearned and hard to believe, but Hannah Waddingham is not like most actors. Her portrayal earned her an Emmy award last year and another nomination this year for the second season of the show.

To celebrate her latest Emmy nomination we’re taking a moment to revisit her conversation with Linda Holmes of NPR’s Pop Culture Happy Hour from last year. They get into her role on Ted Lasso, and her years of performing in theater. Plus, what it’s like to perform in an award-winning musical when a mouse is stuck in your dress.

This interview originally aired in August of 2021.

Liked Ted Lasso’s Hannah Waddingham? Listen to these next...