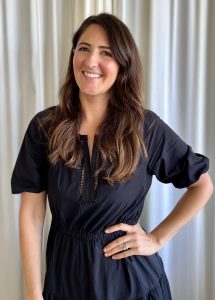 Our guest this week is D’Arcy Carden, from The Good Place and HBO’s Barry.

Approximately 10 years ago, D’Arcy was working her way around the comedy scene. She started out performing a lot of improv. She’d get smaller parts on TV shows like Inside Amy Schumer or Veep or Broad City. She also worked as a nanny for several years. Her boss? Future co-star Bill Hader. In 2016, she got the part that would change her life: Janet, the all-knowing, omnipotent, unfailingly cheerful assistant on The Good Place. The Good Place was a hit – millions of viewers, 14 Emmy nominations, including one for D’Arcy.

D’Arcy sat with Bullseye to talk about her newest project, A League of Their Own. Amazon’s newest series is based on the 1992 movie of the same name. Like the movie, the show tells the story of The Rockford Peaches, an all-women professional baseball team in World War II. D’Arcy’s character Greta plays first base on the Peaches. When the show begins, it’s clear the Rockford Peaches face a tough season, filled with long bus rides, difficult player trades and all the other baggage of being a wartime baseball team. The show also reunites Carden with her longtime improv collaborator Abbi Jacobson, who co-created and stars in the show.

A League of Their Own debuts August 12 on Amazon Prime.

Liked D’Arcy Carden? Listen to these next...

The Song That Changed My Life: Rainn Wilson