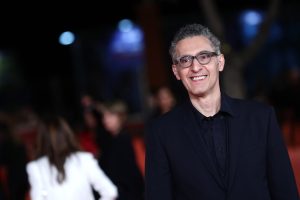 John Turturro is an acting legend. He is an actor that many directors like to work with, including  both Spike Lee and the Coen Brothers. He sort of has the distinctive looks and voice of a character actor, but unlike some character actors, he can do almost anything. Turturro is never not himself, but no two roles are ever the same. He has played characters that are tough, devious, vulnerable, and a bit weird.

This year Turturro is up for an Emmy for his role as Irving in Severance, the mind-bending sci-fi office drama.

When he last joined Bullseye, he had just starred in the movie Gloria Bell, directed by the Chilean filmmaker Sebastian Lelio. The film is kind of an English language remake of the breakthrough 2013 film Gloria.

It is a movie about a relationship between two people who have both been through a lot. Turturro plays Arnold, a retired Navy officer who is divorced with two grown kids. He stars opposite Julianne Moore, who plays Gloria. She is also divorced with two adult children. The two eventually meet and start dating, but things get complicated. It is a love story that is messy and nuanced, with performances from both Turturro and Moore that are touching, emotional and engrossing.

Turturro shared how he nailed down the subtleties and complexities of playing a character that might seem like an average joe in Gloria Bell. Plus, he also shared stories from his time working on some true classics like Spike Lee’s Do The Right Thing and the Coen Brothers’ The Big Lebowski.

This interview originally aired in March of 2019

Liked John Turturro on Gloria Bell, Do the Right Thing and more? Listen to these next...