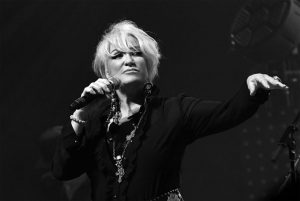 On our latest episode we have the one and only Tanya Tucker!

Tanya is a legend in the country music industry. She’s been singing professionally since she was nine years old! The youngest of four kids, she grew up in a close-knit family in Arizona. After the family moved to Utah, Tanya began auditioning for film and music roles until a chance encounter one day at the Arizona State Fair changed the trajectory of her life forever.

She got the opportunity to work with Billy Sherrill who was the head of Columbia Records at the time. Her debut single, “Delta Dawn,” was a major hit for the teen vocalist. From there, she had a string of country hits throughout the 1970s. The little girl with the big voice who just wanted to be treated like “one of the boys” grew into a woman who would overcome several personal and professional setbacks to become one of the most influential performers in the world of country.

These days, she’s got a new album. Her first record in fifteen years. It’s called “While I’m Livin’.” It’s full of original material produced by Brandi Carlile and Shooter Jennings. The songs are personal and reflective. “Bring My Flowers Now,” — nominated for Song of the Year at this year’s Grammy awards — paints a picture of a woman who has overcome personal addiction, said goodbye to loved ones and has come back stronger than ever.

In this interview, we’ll talk to Tanya about her impressive career and how she learned how to convey such mature emotion through song at such a young age. She talks to Bullseye about how she approaches songs she’s been singing since she was a teen, traveling on the road with her family and turning down the romantic advances of one Mr. Elvis Presley! Yep, the one and only! Plus she tells us about the time her father won the money to pay for her demo tape in a fortunate game of Kino.

For information about her live shows or to purchase tickets visit her website.