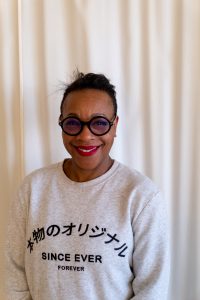 Actor Marianne Jean-Baptiste was immediately intrigued when she got a script about a haunted dress from her agent. She knew a film with a story like this was either going to be brilliant or not work at all. Seeing Berberian Sound Studio and The Duke of Burgundy, Marianne dismissed the latter and decided to trust director Peter Strickland. She knew if anyone could pull this off it was most certainly him.

The script was for Strickland’s latest film, In Fabric. In this movie, Marianne plays Sheila Woodchapel, a recently divorced bank teller. Sheila responds to a lonely hearts ad in the paper in an attempt to reenter the dating world. Before her date she goes searching for the perfect outfit. Then she finds it, a striking and seductive red dress. But what Sheila doesn’t know is that this dress isn’t just any dress — it’s cursed. After she buys it (of course) strange things start happening. What kind of strange things? Let’s just say there’s fire and the occult involved, but you’ll just have to watch it yourself.

Before Marianne had to face the wrath of the crimson fabric she played varied roles, over 50 credits to be exact. Her breakthrough performance was in Secrets & Lies, the acclaimed British drama directed by Mike Leigh. The role earned her a best supporting actress nomination at the Academy Awards. The Southeast London native also spent seven years acting on the American TV show Without a Trace. She played FBI agent Vivian Johnson. These days you can catch her on the series Homecoming, a psychological thriller.

On Bullseye, Marianne talks to us about the difference between feature and series acting, and how her role in In Fabric reconnected her with her passion for the process. Plus, she’ll tell us about the time she read a newspaper for 45-minutes as part of an audition.

If you missed In Fabric in theaters you can rent it online.

Liked In Fabric’s Marianne Jean-Baptiste? Listen to these next...