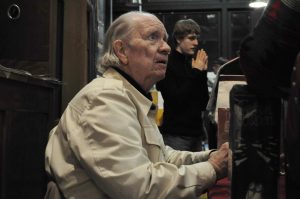 Remembering Gahan Wilson, legendary cartoonist for The New Yorker, Playboy and more
We lost an incredibly talented cartoonist last year, Gahan Wison. He died this past November at his home in Scottsdale, Arizona. He was 89.

For more than 50 years, his twisted single-panel cartoons have appeared in magazines like Playboy and The New Yorker. His work always had this really distinct tone. Gahan’s take on the macabre is loopy, dark and strange. There were monsters. Sometimes aliens. Maybe a pirate.

To remember his life, his work and his impact we are resharing an interview we did with Gahan about a decade ago. He talked about the arc of his career and using childhood fears as inspiration. He also talked about his contributions to the National Lampoon.

When we talked to Gahan for this interview Fantagraphics had just published a 50-year retrospective of his work in Playboy. You can find this compilation, as well as others, online.

This interview originally aired in January of 2010.

Liked Remembering Gahan Wilson, legendary cartoonist for The New Yorker, Playboy and more? Listen to these next...