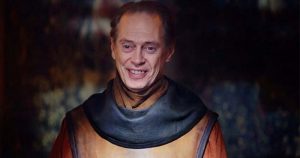 Steve Buscemi has been in tons of movies and television shows throughout his long and successful career in Hollywood. He played the lonely Seymour in 2001’s Ghost World opposite Scarlett Johansson. He also played the frightening “Nucky” Thompson in HBO’s Boardwalk Empire as well as performances in Con Air, Fargo, The Sopranos and NBC’s 30 Rock.

He’s probably most famous, however, for his role as Mr. Pink in 1992’s Reservoir Dogs. He has an extremely recognizable face with soulful eyes that are just perfect for playing the kind of sympathetic bad dudes we’ve grown to know and love him for. He brings humanity and empathy to every role including the times he’s played criminals. Steve has played plenty of those.

He dies a lot on screen, too. He’s pretty good at it. He’s been shot. Hacked up into pieces. Had heart attacks. In fact it happened so much that the Coen Brothers joked about inventing new ways to kill his characters.

His latest project is TBS’ Miracle Workers, now in its second season. It’s an anthology series based on the writings of humorist Simon Rich.

LISTEN: Comedy Writer Simon Rich: Why Writing Like a Child Can Be a Good Thing

Season one of Miracle Workers was set in heaven. A version of heaven that’s run like a big corporation with Buscemi’s “God” sitting high atop the company’s workflow chart as CEO. His version of “God” was pretty apathetic about the inner-workings of humanity. Season two takes place in the Dark Ages where he finds himself in a new role. This time he plays a peasant who goes by the name of…well, let’s just say he’s a guy named after his occupation and he makes his living shoveling the kind of stuff that usually rolls down hill. The show co stars Daniel Radcliffe and features a guest appearance this season by Peter Serafinowicz!

The actor, director and producer joins Bullseye to talk about what it’s like to play a “Sweatpants god,” dying on screen and how his father shaped his career in the civil services as well as acting. Plus, he’ll talk to us about trying his hand at stand-up as an eighteen year old kid from Long Island. All of that and more on an all-new Bullseye!

Liked Steve Buscemi? Listen to these next...