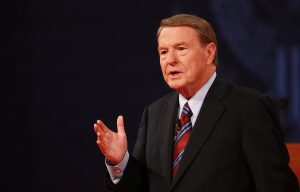 We lost an incredibly talented broadcaster a few weeks ago: Jim Lehrer. He died at his home in Washington, D.C., on January 23. He was 85.

With his Texas accent, Lehrer was affable and charming. He was also incisive and unwavering, when he needed to be. Jim was also a prolific writer – he wrote more than 20 novels.

When we spoke to Jim in 2010, he’d just written a mystery novel. It was called Super. It’s set in the early 1950’s, set aboard the Super Chief, the legendary train that ran through the American Midwest and Southwest.

He shared stories about juggling his job at a bus depot while being a college student and at Victoria College. Plus, the challenges of being the editor of his school’s newspaper. He also shared how he got his start in public media.