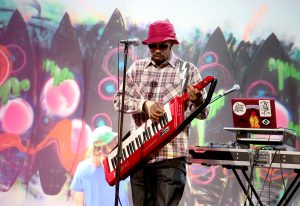 The Song That Changed My Life is a segment that gives us the chance to talk with some of our favorite artists about the music that made them who they are today. This time around we’re joined by DāM-FunK.

DāM-FunK is a modern day champion of funk music. He’s recorded dozens of albums. His army of analog synths captures the funk sound of the late ’70s and early ’80s.

Dam Funk joins us to talk about Chase by Giorgio Moroder. He explains why he felt the song transcended genres, and how it helped him approach his craft when started making his own tunes.

DāM-FunK’s latest record is out now, it’s called Above the Fray. He’s also the host of the Apple Music show Glydezone Radio, where he spins a mix of hits and obscure finds from his collection.

Liked DāM-FunK on the Giorgio Moroder song that changed his life? Listen to these next...