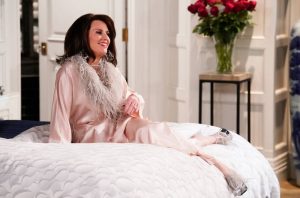 Comedy legend, Megan Mullally has been performing her whole life. Or as she likes to put it, popped out of the womb with a top hat and tap shoes on. Megan is not afraid to be ridiculous, in fact she embraces this proclivity in her over-the-top characters. You’ve seen her as the librarian seductress on Parks and Rec and heard her as the cat-loving eccentric Aunt Gayle on Bob’s Burgers.

Megan got her big break playing perhaps her most wacky character, the martini-toting socialite Karen Walker on the groundbreaking Will and Grace. Even if you don’t follow the show chances are you know Karen’s voice: high-pitched, sometimes grating and always inescapable. Whether you find this annoying, hilarious, or a little of both, one thing is for sure her character is an unforgettable force. Megan won an Emmy for her performance on Will and Grace in 2006.

The Will and Grace reboot is in its last and final season so make sure to catch it on NBC.

Beyond the realm and television and film you can find Megan performing in her “punk-vaudeville” duo Nancy and Beth. You can also hear her give an intimate and comedic performance with husband Nick Offerman in The Greatest Love Story Ever Told: An Oral History.

On Bullseye Megan talks to us about how she developed her character Karen Walker, her not-so usual upbringing, and oddly enough, winning an Emmy Idol with Donald Trump.

This interview originally aired in August of 2018.

Liked Megan Mullally? Listen to these next...