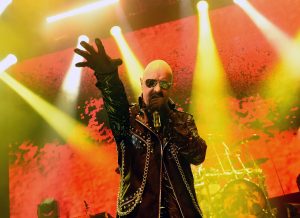 Legendary musician Rob Halford on being a “Metal God,” Judas Priest and his holiday recordings
Rob Halford is a legend in the world of metal music. He is the lead vocalist of heavy metal group Judas Priest.

It’s hard to imagine the world of metal without their influence on the genre – from black leather outfits to riding motorcycles on stage. The band’s hits include Breaking the Law, You’ve Got Another Thing Coming and Hell Bent For Leather.

He recently released an autobiography called Confess. Rob tells his story without holding anything back. Some truly incredible accounts: like the time he handcuffed himself to Andy Warhol or when he explained heavy-metal to Queen Elizabeth.

We’re revisiting our interview with Rob from 2009. In this conversation Rob Halford reflects on the legacy of Judas Priest. Plus, coming to terms with his queer identity and his coming out within the metal community.

We also talked about holiday music. When Rob joined us he had just released the heavy metal holiday record – Halford III – Winter Songs. If you’re looking for more alternative holiday tunes check out Celestial by Rob Halford with Family & Friends from last year.

Liked Rob Halford of Judas Priest? Listen to these next...

Carrie Coon on ‘The Leftovers,’ ‘Fargo’ and ‘The Nest’