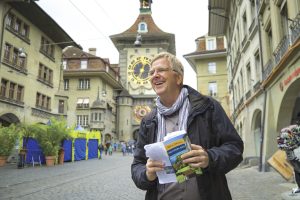 (Photo: Courtesy of the Artist)

Rick Steves is probably best known as a public media travel expert. He’s mastered the art of travel in his public television programs.

For over 20 years, he hosted Rick Steves’ Europe. Before that, for nearly a decade he was your guide in Travels in Europe with Rick Steves.

Rick always finds ways to travel around Europe that are fun and practical. He’s got a cheerful, and charming presence on TV.

If you have questions about being abroad, Rick’s got the answers. On your flight across the Atlantic, he’ll stress the importance of drinking lots of fluids and will remind you to get up and walk around the cabin as often as you can – it’s good for circulation.

Rick also hosts a podcast and radio show about travel, writes guide books, organizes tours all over the continent.

Since around March last year… Rick hasn’t been able to travel like he used to. He’s instead taken to finding ways to bring Europe home to the US on his new show Rick Steves’ Monday Night Travel.

In it, Rick hosts a weekly virtual happy hour on Zoom from his living room. Sometimes he cooks – other times he’ll read up on history or reflect back on fond memories of travels past.

Rick Steves’ new special Europe Awaits takes a tour through some of Rick’s favorite cities. Find it on June 7 on public TV stations all over the country. More information here.

Liked Rick Steves? Listen to these next...