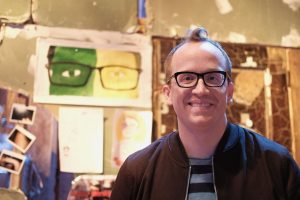 The Craziest Day of my Entire Career is a segment that gives us the chance to talk with some of our favorite people about some truly unbelievable stories. Stepping up to the plate this time around is Chris Gethard.

Chris Gethard is a longtime standup comedian. The last time we had him on the show, he had just done a special for HBO called Career Suicide, a very funny, very harrowing one-man show.

His latest project is a new special called Half My Life that’s out now. He shot it a couple years ago, and it’s styled sort of like a documentary. It follows Chris on tour playing at venues of all shapes, sizes, and comfort levels. It’s also, of course, very funny and harrowing.

When we asked Chris about the craziest day of his entire career, he shared a story with us that involved The Chris Gethard Show. A raucous, chaotic variety show that has, at times, appeared on Public-access TV, prestige cable, and as you will hear, the UCB theater in Manhattan.

During our conversation, we learned that Chris Gethard has met Diddy. He has stared down the legend. He has lived the magic. And it’s even crazier than we imagined. He shared with us the insane, jaw-dropping, completely true story of the time he got Diddy to come play at the UCB theater.

Liked Comedian Chris Gethard on the Craziest Day of his Entire Career? Listen to these next...