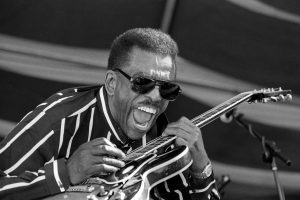 Syl was a Chicago soul and blues singer. He was probably best known for his work on Hi Records, the home of Ann Peebles and, of course, Al Green. In fact, he turned down a record deal that ended up going to Green.

The songs Johnson cut for Hi in Memphis were some of the best soul records of their time. Where Green’s voice was light and romantic, Johnson’s had weight and edge. And Johnson wasn’t just a voice – he wrote some of his greatest tracks, like 1970’s Is It Because I’m Black.

Hip-hop producers have feasted on Johnson’s records, making him one of the most frequently sampled recording artists in the history of the genre. Take Different Strokes, from 1968: Just that one song has been sampled literally hundreds of times. By the Wu-Tang Clan, Kanye West, Jay-Z, Public Enemy, De La Soul, Eric B & Rakim… it’s basically a list of everyone who’s ever cut a great rap song.

But more than that, Johnson was a career artist. He lived in Chicago, where he raised his daughter Syleena, a great soul singer in her own right. He made soul and blues records throughout his life. Never stopped working.

We spoke to Syl back in 2012. He was in his 70s then and gigging relentlessly, and his albums had just been re-released by Numero Group. Johnson was whip-smart, funny, and maybe a little cantankerous.

This interview originally aired in October 2012.

Liked Remembering Syl Johnson? Listen to these next...