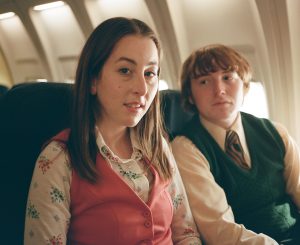 Alana Haim on Licorice Pizza, growing up in the San Fernando Valley and more

Alana Haim has been leading two very distinct careers lately.
First, there’s her music – Alana is one third of the Grammy nominated, critically acclaimed rock group Haim.
And then there’s her acting.
A few years ago, Alana got a call from director Paul Thomas Anderson. He had a part in a new movie he was working on called Licorice Pizza, and he thought Alana might be a fit for it. Although she had never really acted before, Alana took it.
The role has earned her a Golden Globe nomination along with a bunch of other awards. The film is also up for Best Picture, Best Original Screenplay and Best Director at this year’s Academy Awards.
Licorice Pizza is a thoughtful, beautiful, and sort of meandering coming of age movie. It’s just as much about its setting in the Valley as it is about the main characters. If you have not had a chance to see the movie, it’s still playing in theaters now.

Alana joins the show to talk about Licorice Pizza and how she found out she got the lead part in the film. She also chats with us about what it was like growing up in the San Fernando Valley, playing in a band with her family and more.

Liked Alana Haim? Listen to these next...