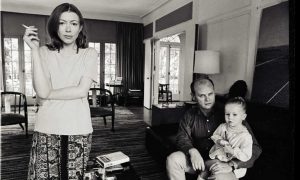 Griffin Dunne on the documentary ‘Joan Didion: The Center Will Not Hold’

Just before Christmas this past year, the writer Joan Didion died. She was 87.

Didion rose to fame for her journalism – she immersed herself in stories. In the late 60s, she broke through with Slouching Towards Bethlehem.

In her career she covered a bunch of different topics – counter culture, war, immigration. She also wrote a handful of novels, a couple memoirs.

A couple weeks ago, the New Yorker’s Hilton Als, wrote of Didion:

Her genius—and it was genius—lay in her ability to combine the specific and the sweeping in a single paragraph, to understand that the details of why we hurt and  alienate one another based on skin color, sex, class, fame, or politics are also what make us American.

We never got to interview Didion – she became a pretty private person in her last years. But in 2017, a documentary about her came out. The film is called Joan Didion: The Center Will Not Hold. It’s an intimate look at Didion’s writing and her personal life.

The film paints a portrait of a person committed to their craft absolutely, of a person who lived a life beset by tragedy: in 2003, her husband John Dunne died of a heart attack. Not long after, she lost her daughter.

The documentary was directed by Griffin Dunne, her nephew. Griffin Dunne is also an actor – he was in My Girl, the Martin Scorsese film After Hours, and the TV show This is Us.

We remember the life of Joan Didion by revisiting this conversation with Griffin on the latest episode. We talked with him about the documentary, and the legacy of his aunt.

This interview originally aired in October of 2017.

Liked Remembering Joan Didion? Listen to these next...