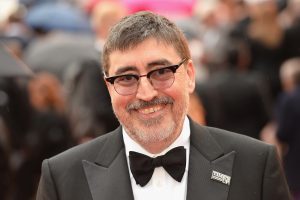 Alfred Molina started his acting career almost 40 years ago. First on British TV and a couple of movies later on. His first big part came in 1981’s Raiders of the Lost Ark. His character is the guide who steals the idol from Indiana, then abandons him right at the very beginning of the film.

Since then he’s gotten over 150 roles. He’s responsible for a bunch of other unforgettable scenes, in films like Boogie Nights, Chocolat and Magnolia. He played Dr. Octopus in Spider-Man 2 and has now reprised the role for Spider-Man: No Way Home, which is out now.

When we talked with him in 2017, he’d just starred in the first season of Feud, the FX series. It’s set in 1962, and it tells the story of the rivalry between Bette Davis and Joan Crawford when they filmed the movie What Ever Happened to Baby Jane? Molina plays Robert Aldrich, the film’s director.

Alfred has a particular knack for being able to capture your attention in whatever project he’s in, even when he’s playing unlikeable characters, including villains. He talks to Jesse about his approach to playing unsavory people, whether it’s a backstabbing guide in Indiana Jones: Raiders of the Lost Ark, Dr. Octopus in Spider-Man 2, or a crazy drug dealer in Paul Thomas Anderson’s Boogie Nights.

This interview originally aired in August of 2017.

Liked Alfred Molina? Listen to these next...