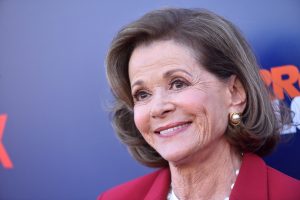 Last month, the actor Jessica Walter died. She was 80 years old, her family says she passed away in her sleep.

Her career spanned over six decades.

In recent years, she was best known for her portrayal of Lucille Bluth on Arrested Development. She also voiced Malory Archer on the animated show Archer.

But she’s starred in hundreds of on screen performances, from The Alfred Hitchcock Hour, The Love Boat, and Trapper John, M.D. to a starring role in Clint Eastwood’s directorial debut Play Misty for Me.

We’re taking a moment to remember the brilliant Jessica Walter by revisiting our conversation from 2014.

At the time she was promoting the latest season of the animated show Archer. She talked about her voice work on the program, her love of Lucille Bluth and working with Clint Eastwood. She even divulged a few trade secrets from her role on Flipper.

Walter’s family has asked that in lieu of flowers, for fans of her to send their support to the charity Guiding Eyes for the Blind, which is an organization that helps train seeing-eye dogs.

Liked Remembering Jessica Walter? Listen to these next...