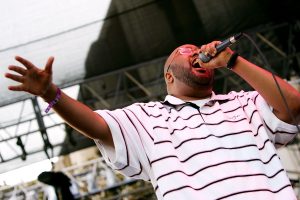 In this episode, we’re looking back on the life of rapper Gift of Gab. He died last month at just 50 years old. Gab was the co-founder and MC for the legendary Northern California hip-hop group Blackalicious.

If you’re a serious hip-hop head, you know Gab and Blackalicious. If you’re not, you might recognize him for the tongue-twisting track Alphabet Aerobics. He could go toe-to-toe with anyone, and he knew it. Sometimes you wonder how he managed to breathe, never mind think.

He was an incredible rapper — a virtuoso. But he was much more than that. His lyrics were insightful and thought-provoking. He was a philosopher as much as he was a battle rapper.

First, we’ll listen to a 2005 interview with Gab and DJ Chief Xcel, from back when this show was called The Sound of Young America.

Then, the Outshot: Jesse talks about what Gift of Gab meant to him, and what it’s like to lose a hero.

Liked Remembering Gift of Gab? Listen to these next...