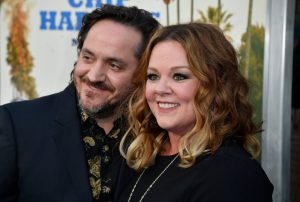 The married couple reflects on their comedic collaborations

Melissa McCarthy has portrayed unforgettable parts in comedy films like Bridesmaids, The Heat and Spy.

She also played the lovable cook and best friend, Sookie St. James, on Gilmore Girls. Then she had landed a titular role on the CBS show Mike & Molly, for which she won an Emmy.

She met her husband; Ben Falcone, when they were members of the Groundlings theater in Los Angeles and have been performing together on stage and screen for almost 20 years now.

Together the two have made five movies now. Their latest collaboration is the Netflix film Thunder Force, a superhero comedy which was released earlier this year.

We’re taking a moment to revisit Melissa and Ben’s conversation from 2014.  When they joined us, they’d just collaborated on their first feature length film: Tammy. Ben co-wrote and directed the movie. Melissa starred as the title character.

They’ll talk about their high school days, including Melissa’s goth phase, their fateful meeting in the Groundlings, and what it was like getting Kathy Bates to play a role that was literally written for her.

This conversation with Melissa McCarthy and Ben Falcone originally aired in 2014.

Liked Melissa McCarthy and Ben Falcone? Listen to these next...